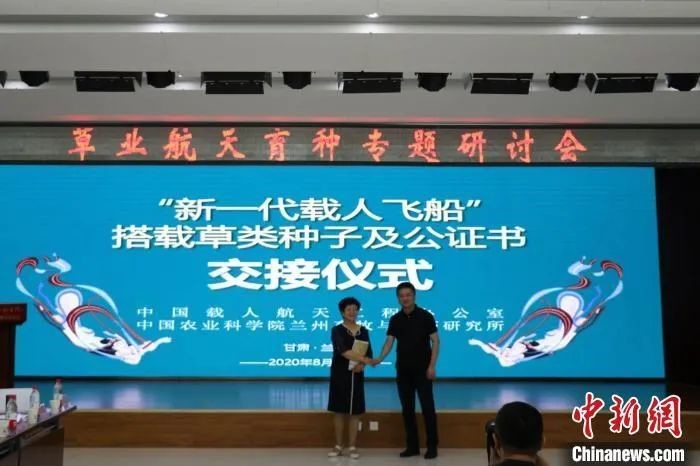 Recently, at the Symposium on Forage Aerospace Breeding held in Lanzhou, Gansu, the Zhongtian 1 alfalfa species that was selected and bred by the Shenzhou-3 spacecraft has attracted much attention. "After 16 years of selection and breeding research, Zhongtian No. 1 alfalfa grass species was approved by the National Grass Variety Approval Committee in 2018. Practice has proved that the grass has excellent and stable germ quality and outstanding high-yield characteristics." Lanzhou Animal Husbandry and Yang Hongshan, chief expert of the stress-resistant pasture breeding and utilization team of the Institute of Veterinary Medicine, introduced. In fact, whether it is in carrying out high-tech breeding, broadening breeding channels, creating new high-yield and high-quality varieties, or serving the national economy and people’s livelihoods for national agriculture and ecological construction, the space mutation breeding experiments carried out by manned space technology have shown remarkable results. Achievement.

Space breeding is a new way of breeding that combines space technology, biotechnology and agricultural breeding technology. Using spacecraft to carry biological materials under the combined effects of strong radiation, microgravity and weak geomagnetism in the cosmic environment, space mutagenesis produces mutations at the genome level. After returning to the ground, at least 4 generations of ground breeding are carried out, and new traits are screened out. Materials, new germplasm, and finally breed new strains and new varieties with stable genetics and good quality.

Aerospace breeding has made important contributions to many fields such as my country’s food security and ecological environment construction. The cultivated new varieties of horticultural crops such as wheat, rice, corn, soybeans, cotton and tomatoes, peppers have been planted and promoted in an area of ​​over 2.4 million hectares. 1.3 billion kilograms. According to estimates, the scale of direct economy created by space breeding exceeds 200 billion yuan.

Over 200 new varieties of aerospace breeding have been approved

Since the establishment of the China Manned Space Project, the China Manned Space Engineering Office has successively planned and implemented a series of space breeding experimental projects. Since the start of the Shenzhou-1 flight mission in 1999, the China Manned Space Engineering Office has used the resources of the Shenzhou spacecraft, space laboratory, and a new generation of manned spacecraft test ship in the previous flight tests of the project. Space-borne mutagenesis experiments of more than 100 species and more than 5,000 crop seeds and plant materials. After years of ground breeding and scientific research, up to now, more than 200 new varieties of space breeding have passed national, provincial and ministerial review.

Tiangong-2 is equipped with higher plant cultivation experiments. It is the first time in the world to obtain real-time images of green fluorescent protein controlled by the Arabidopsis flowering gene promoter in a space environment. It is also the first time that my country has successfully carried out the whole life of plants from seed to seed. Cycle cultivation provides a useful reference for the establishment of a plant-based space life ecosystem in the future.

After more than 30 years of research and application, the results of aerospace breeding have quietly integrated into all aspects of people's lives, not only promoting the improvement of crops, but also being used in food processing, wine brewing, biopharmaceuticals, oil extraction and many other directions.

Forage breeding in China is still in the initial stage, mainly focusing on the selection and breeding of alfalfa varieties. There is still broad room for development in the future. The "Zhongtian No. 1 Alfalfa" and "Nongjing No. 14 Alfalfa" have been successfully cultivated. Such as national, provincial and ministerial forage species, promoted the research and development of space breeding of grass plants, and planted more than 250,000 acres across the country, effectively solving the problems of low domestic high-quality and high-yield species and rapid degradation of foreign introduced species.

In recent years, the technological achievements of aerospace breeding have also played a significant role in the fight against poverty. Using space mutation breeding technology, South China Agricultural University has successfully mutated and created a batch of new germplasms that are resistant to diseases and even immune to rice blast varieties "Lijiang Xintuan Heigu" and "Zhonger Ruanzhan" . Using these disease-resistant germplasm resources, new varieties with better quality, high yield and high resistance to rice blast were developed.

The Chinese space station is expected to be completed and put into orbit operation around 2022. After the completion of the China Space Station, it will serve as a national-level space laboratory with the ability to support long-term manned flights in low-Earth orbit, conduct multi-field space science experiments and technical experiments, and study and solve the basic problems of human long-term survival in space. Scientists carry out space scientific research to provide more and better experimental conditions and opportunities, and various research results including space breeding will surely benefit the lives of ordinary people more.

Next： Health ｜watching the Olympics in a healthy way